Here is a Pemco SD35 which keeps its original Burlington Northern road number 950. The number happened to fit the numbering scheme: 900's are all non-revenue, and this will be assigned to heavy work trains. Also all even numbers are powered units.

So all that remained was some patch paint and a Cape Ann logo. 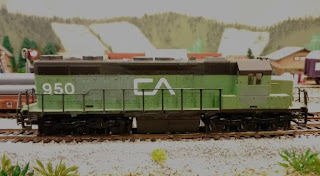 Posted by Rick Mills at 1:16 PM No comments:

Here is a fantasy GP-18AA, made from two AHM GP-18 shells spliced onto one unmodified chassis. Now it is put to work as a double ended yard switcher. 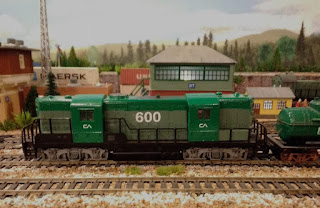 Posted by Rick Mills at 1:13 PM No comments: 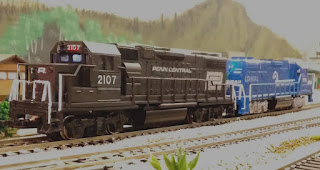 Both units are only 2-axle power pickup. Since the layout's turnout frogs are not powered, this can lead to stalls. So these two units are now permanently wired together in parallel to share electrical pickups. Now they are immune to stalls.

Posted by Rick Mills at 1:12 PM No comments: 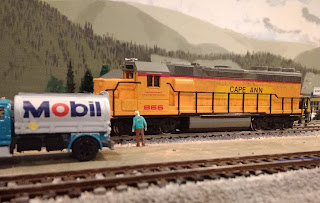 GP40 866 was recently acquired from the Union Pacific, and was placed into service immediately. There was no time for a trip to the paint shop, so the UP name was painted over and CAPE ANN quickly applied. It retains the original 866 road number, as that number was not in use on the Cape Ann anyway. 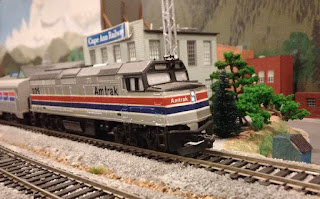 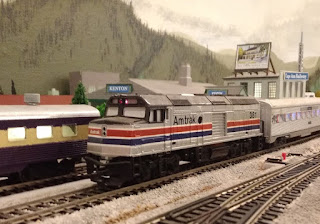 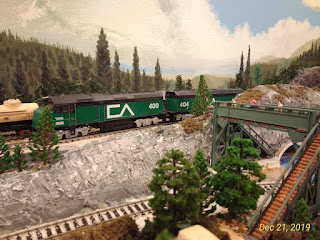 Rail fans line the footbridge at Kimball’s Campground to catch a view of Cape Ann FP45’s 400 and 404 coming around the curve at Cascade with The Acadian in tow. The footbridge allows campers access to the river and beach without having to cross the tracks in the foreground. 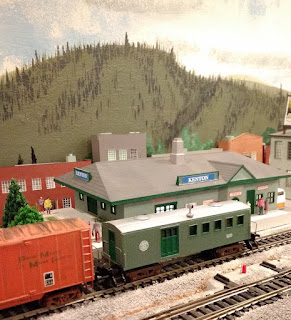 The Cape Ann Cannonball is a single coach providing passenger service attached to train 61/62, the mid-day Kenton Turn as it switches customers between Davis and Kenton.

The Cannonball departs Davis Yard daily at noon, with stops* at Maris, Hammond, Cape Ann, and Glen Cove; arriving at Kenton generally around 2:00 PM. It then reverses direction, making the same stops, before returning to Davis generally by 4:30 PM. This is provided as a mid-day transportation option during the period when only freight traffic is running.

Passengers are advised this is no-frills transportation - there is no power available, no food service, and the only published time is departure from Davis Yard daily at noon. All arrivals down the line will depend on switching needs and may vary widely from day to day. Frequent stops will occur while freight cars are switched at industries along the way. Passengers should inquire at their local station, where the agent can advise expected arrival times.
While there is no food service on board, the train holds at Kenton where a cafe is available at the station and several takeout options are nearby.


*all stops on the Cannonball are considered flag stops. Train may not stop unless passengers are boarding or departing.

Posted by Rick Mills at 2:21 PM No comments: